Review: Surprises from an animal hoarder in documentary ‘For the Birds’

Those who watch their local news are familiar with this far too frequent story: authorities rescue countless animals from an overcrowded home. But after showing horrific images of starving, bedraggled creatures, they move on to the next headline without the time to explore the narrative further. With “For the Birds,” director Richard Miron offers an empathetic character study of an animal hoarder who defies expectation, making a documentary that does the same in the process.

Filed Under: For the Birds

‘For the Birds’ Review: From an Overcrowded Chicken Coop Springs Unusual Life

What makes the film stand out is its editing, which carefully builds a story from multiple perspectives.

When Richard Miron began filming his indelible documentary, “For the Birds,” his subjects, Kathy Murphy and her husband, Gary, were living alongside a collection of some 200 chickens, geese, ducks and turkeys. The birds had spilled out from their makeshift coops on the lawn. To Kathy’s delight and Gary’s disgust, they had filled their mobile home with the sounds, stinks and scum of the coop.

Filed Under: For the Birds

It never ceases to amaze me that, after attending countless documentary Q&A’s over the years, how many times filmmakers start out with a specific idea and end up with something completely different and more profound than their original concept.  In this case, first-time director Richard Miron set out to do a film about animal rescue so he volunteered at an animal sanctuary in Wawarsing New York while a senior at Yale.

END_OF_DOCUMENT_TOKEN_TO_BE_REPLACED

We are pleased to announce that Dogwoof Sales, the leading documentary sales agent and UK theatrical distributor, has picked up For the Birds. The company is regarded as the foremost documentary specialist brand in the world, and is a stamp of the highest quality content. 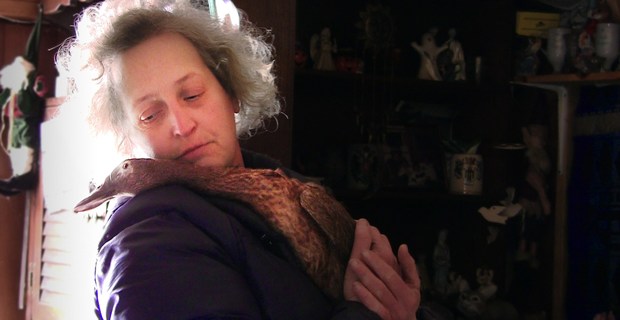 Kathy Murphy, the central figure in Richard Miron’s captivating For the Birds, is the kind of person who you instantly regret entering into conversation with. She is antisocial and paranoid, and her hygiene falls well outside of social norms. She spends most of her day caring for the dozens of geese, chickens, and turkeys that have taken over the home she and her husband share in upstate New York. After a neighbor reports the unsanitary conditions, Murphy engages in a pitched battle with sanctuary workers and, eventually, local authorities to keep her beloved flock. As she refuses to give in to the authorities, she puts her marriage and even her freedom at risk.

It’s a gripping tale, and the film’s greatest achievement may be how it methodically changes our perception of its protagonist. It would have been easy to mock or judge Murphy—despite her affection for the birds, they are clearly better off at a well-run sanctuary—but Miron’s steady and sympathetic eye persistently searches for her humanity.

As tensions escalate and Murphy begins to unravel from the strain of the fight, For the Birds unveils a deeply humanistic bent (it’s executive produced by S-Town’s Brian Reed and shares the podcast’s gentle empathy). What emerges is a satisfying, even thrilling inquiry into mental illness, animal welfare, and the thin line between altruism and self-interest. It’s a film not to be missed. —Noah Gittell