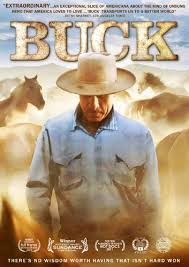 WHAT:  The 13th film presentation of the collaborative efforts of the Hill Country Film Society and Fritztown Cinema is BUCK, a documentary that examines the life of Buck Brannaman, an acclaimed “horse whisperer,” who recovered from years of child abuse to become a well-known expert in the interactions between horses and people.

This visually stunning film follows Brannaman as he renounces the violence of his upbringing and teaches people to communicate with their horses through leadership and sensitivity, not punishment. His focus is on building trust as he dramatically transforms horses and people with his understanding, compassion, and respect. In the film, the animal-human relationship becomes a metaphor for facing the daily challenges of life.

Brannaman served as the inspiration behind the character “Tom Booker” as portrayed in Nicholas Evans’ novel The Horse Whisperer. He was also the technical consultant to actor Robert Redford during filming of the movie by the same name.

A panel Q&A session will immediately follow the screening which will include a professional horse trainer to discuss the use of natural horsemanship as an effective approach to building rapport with horses. The panel will also share tools of the trade and explain how horses can be used as co-facilitators in team building and communication exercises.

The society would like to thank Cindy Meehl, director of BUCK and founder of Cedar Creek Productions, and her assistant Brittany Batterton for providing this screening.

Information on upcoming indie screenings at Fritztown Cinema can be found on HCFF Event page: http://www.hillcountryff.com/home/events/.

Free; donations will be accepted benefiting the Hill Country Film Society in its outreach to Fredericksburg and the surrounding Hill Country community

@HC_Film_Fest and @FritztownCinema to present @BuckTheFilm on 4/15 @ 6:30 pm as part of free indie screening series.

Set in Fredericksburg, Texas, the Hill Country Film Festival (HCFF) is the vision of its director Chad Mathews, an actor, screenwriter, producer, and native Texan. Having participated in the film festival circuit, Mathews came to love the camaraderie and shared respect of those who are committed to the art of independent filmmaking. HCFF was created to celebrate and showcase filmmakers from Texas and around the world and is annually presented by the Hill Country Film Society, a 501(c)3 non-profit organization. For more information visit: www.hillcountryff.com.

Newly licensed for beer and wine sales, Fritztown Cinema, owned and operated by Sloan Ruth, is welcoming movie fans to its location at 2254 Highway 87 South in Fredericksburg, Texas. For more information, visit www.fritztowncinema.com or www.facebook.com/fritztowncinema.